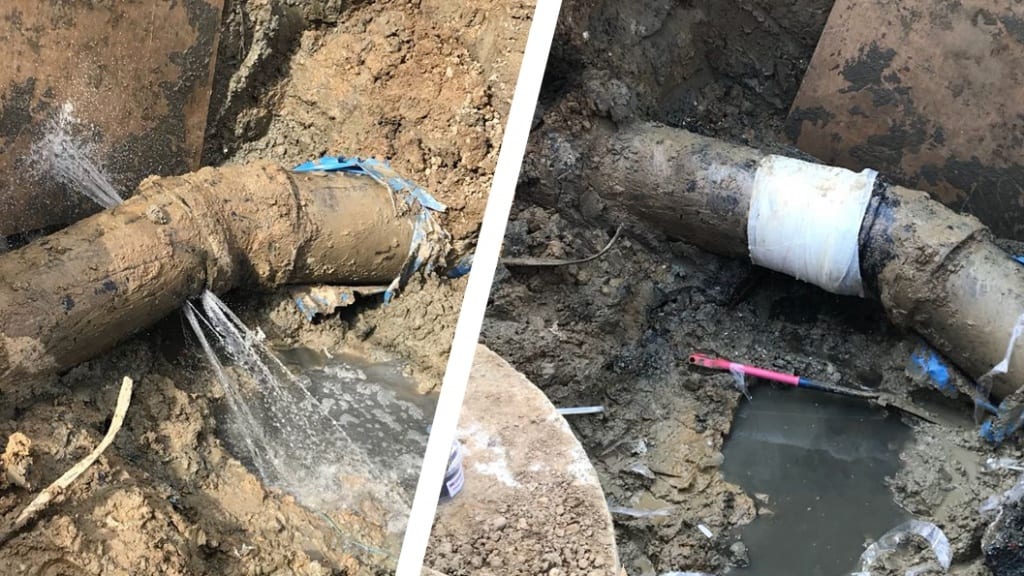 A Waste Water Treatment Works in the United Kingdom was undergoing a major infrastructure upgrade when contractors cut through a 450mm waste water pipe – with disastrous consequences.

The contractors mistakenly believed the pipe in question had been decommissioned and was due for removal. In actual fact, it was one of the most important live pipes at the site in Sussex as it was linked to all of the waste treatment ponds. As a result, there was no feasible way to stop the flow once the pipe had been breached.

The severity of the cuts inflicted on the pipe meant that from the moment it was damaged, a large amount of contaminated water began escaping. A quick waste water pipe repair was therefore required to prevent a catastrophic and embarrassing situation from unfolding.

The Waste Water Works got in contact with Sylmasta. Within an hour of receiving the call, all the SylWrap Pipe Repair equipment needed to permanently repair the badly damaged pipe had been delivered to the site.

Firstly, Wrap & Seal Pipe Burst Tape was applied to the pipe to stop the flow. Wrap & Seal’s self-fusing technology combined with the fact that it stretches to 300% its length ensured that it was able to seal the leak despite the high amount of pressure flowing through the pipe.

The Wrap & Seal was then overwrapped using SylWrap Bandages, reinforcing the repair and providing a permanent fix. Because SylWrap is water-activated, very little preparation was needed to complete the repair and it left the pipe with a rock-hard protective layer.

The ease with which SylWrap products can be applied and the speed at which they are effective meant that the repair was completed in under 30 minutes. In monetary terms, it cost the Waste Water Treatment Works less than £300 – and that included spare Wrap & Seal and SylWrap Bandages should they suffer another unexpected problem during the remainder of the redevelopment works.

Had SylWrap Pipe Repair products not been so readily available to offer a waste water pipe repair solution, this could have turned into a serious environmental issue for both the contractor and the site owner.

The cost of replacing the pipe combined with the associated clean up of the leaking contaminated water could also have run into many thousands of pounds.

Understandably, the project manager was extremely happy with how quickly and efficiently the problem was fixed. He got in contact shortly after, saying “Thank you so much, the pipe repair worked a treat.”

Both of these products are available in the SylWrap Universal Pipe Repair Kit and the SylWrap Pipe Repair Contractor Case which contains enough equipment to carry out multiple fixes.