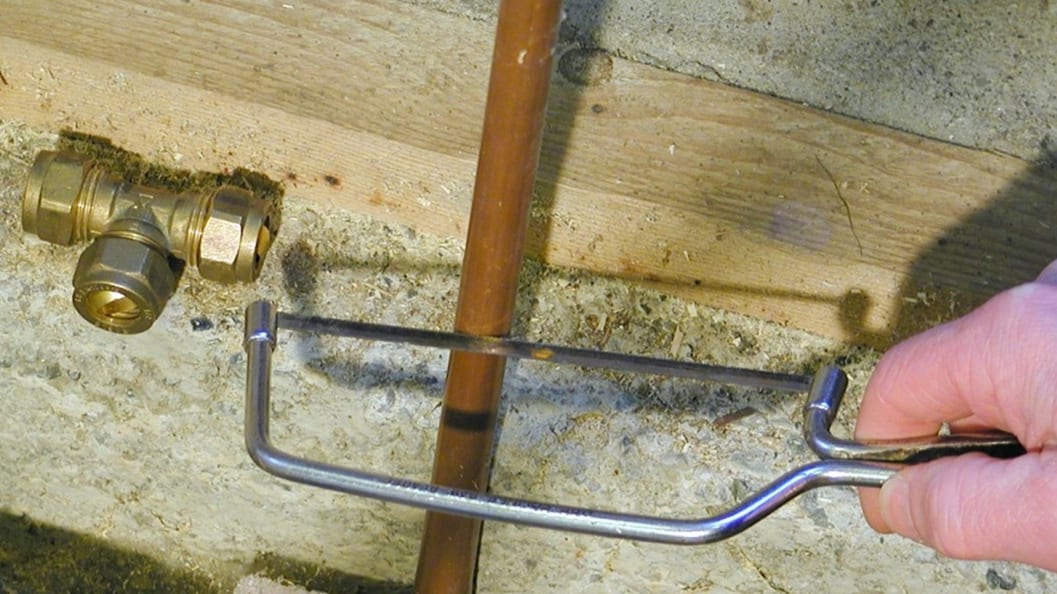 There are plenty of dangers which come with home DIY projects. One of the biggest is to accidentally drill a hole through something you shouldn’t, especially if that something is either carrying electricity or is a water pipe.

Unintentionally cutting into a water pipe can be a chastening experience which happens far more often than you’d think. It only takes one screw hanging up one medicine cabinet to be one millimetre out of place in a bathroom renovation and it could cut through the plumbing which supplies water for the entire bathroom.

The natural reaction to accidentally drilling though a water pipe is to panic – but repairing the damage isn’t as difficult as you might think. In fact, with the correct procedures and the right equipment, you can carry out a permanent repair yourself.

Here’s what to do if you accidentally drill through a water pipe.

Turn the water off

Turning the water off is the number one priority after you’ve accidentally drilled though a pipe. Locate your home’s stopcock to turn off the mains supply, which will stop water continuing to flow through the damaged area. You should also open the faucet at the sink to allow water to drain out.

In older properties, the stopcock or mains water valve could be impossible to turn due to age or rust. If this is the case, then it doesn’t have to be the end of the world – there are means and ways to repair pipes even when flow cannot be turned off.

In order to inspect and repair the damaged pipe, you need to gain access to it. If it is behind a wall, then remove the drywall around the area using a drill or a drywall saw. If it is underneath the floor, then take up the floorboards.

You should take extra care when attempting to reach the damaged pipework. The last thing that you want to happen is to drill accidentally drill another hole into the pipe.

Inspect the damage caused to the pipe

Once you’ve gained access to the pipe which you’ve accidentally put a hole in, you can get a better idea of the damage caused. A leaking pinhole for example is going to be a much easier fix than a deep longitudinal cut several inches in length.

You’ll also be able to see the type of pipe and the size which you’re dealing with. Sometimes, a copper pipe may be better suited to a different repair than a plastic pipe.

This is especially true if the pipe can be fixed using only epoxy putty, with Superfast Sticks for example having different formulations depending on the material that requires repair.

Decide if you can fix the leaking pipe yourself

After assessing the pipe type and the damage caused by you accidentally putting a drill through it, you can take a decision over whether to carry out a repair yourself or if the services of a fully qualified plumber are required.

DIY pipe repairs have become incredibly easy over the past 10 years or so thanks to the introduction to the market of all-in-one pipe repair kits, such as our SylWrap range.

These kits contain all the products needed to permanently fix a leaking pipe inside of 30 minutes and they are effective on pipes of all materials and sizes – you simply seal the leak either with the epoxy putty or pipe repair tape provided and then overwrap with a pipe repair bandage.

There are multiple advantages to fixing damage yourself which has been caused when you accidentally drill a hole into a pipe. Calling a plumber will set you back anywhere between £40 – £60 per hour based on average rates in the United Kingdom in 2019.

Given that this will be an emergency call, you may also find yourself subjected to a call out charge which will be fixed around the same price. Already, you are looking at having to pay over £100 to get the problem repaired.

Contrast that to a pipe repair kit being available from as little as £13 and you can already begin to see the saving that you can make my repairing a broken pipe yourself.

If necessary, call a professional

Repairing a leaking pipe yourself is easy, but there could be a number of reasons why you don’t wish to carry out the task yourself. If that is the case, then you should find a reputable local plumber to come and carry out the work for you.

As always when hiring any sort of tradesman, be sure to carry out thorough checks on their credentials. If you’ve already done damage when accidentally putting a drill into a pipe, then you won’t want to compound it with a substandard repair.