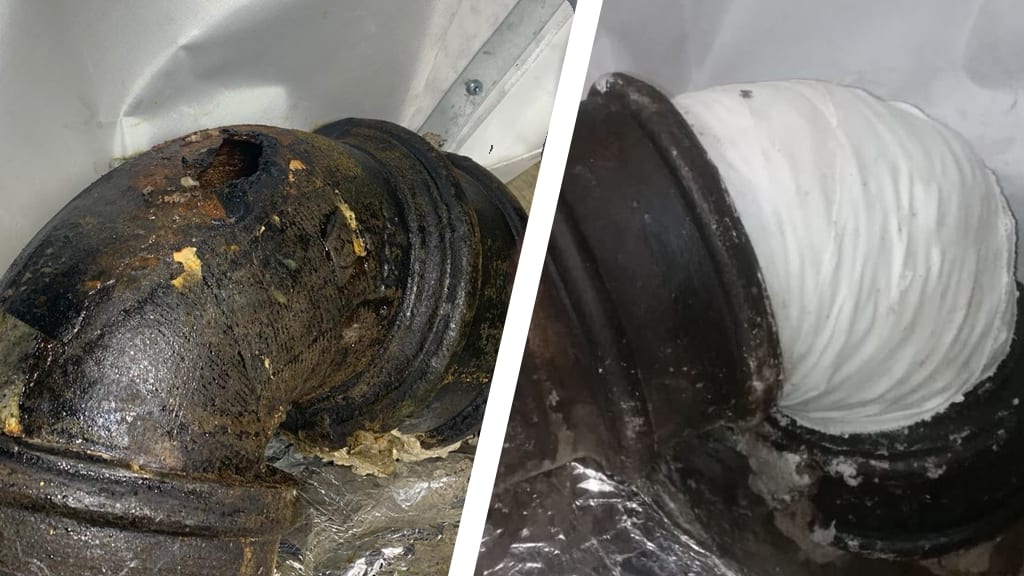 An iconic central London hotel faced having to shut one of its most prestigious rooms after a cast iron wastewater pipe located in the ceiling above developed a large circular crack which initially proved impossible to repair.

Several attempts had been made to repair the leaking cast iron wastewater pipe, but its location within the hotel made it particularly troublesome. The pipe was crammed into a gap between the floor of one level and the ceiling of another, leaving virtually no room to work.

The hotel’s initial repair attempt had seen them try and wrap the pipe with a repair bandage. Although the crack was successfully covered, it was not successfully sealed and so began leaking again once pressure was turned back on.

The 50 x 25mm hole therefore required an alternative repair method. To complicate the repair further, the crack in the cast iron wastewater pipe was on an elbow joint.

Sylmasta decided that the most effective pipe repair product to seal the hole would be Superfast Steel Epoxy Repair Stick. The size and the position of the crack still possessed some challenges, which were eventually overcome by some out-of-the-box thinking by the Sylmasta technicians.

The Superfast Steel Stick was hand kneaded as normal, but rather than being pushed immediately into the crack it was instead formed into a disc larger than the hole in order to completely cover it. This disc of epoxy putty was then attached to a strip of polythene sheeting.

The sheeting would support the epoxy putty whilst it was stretched over the crack in the pipe. Once in position, the edges of the disc were pushed tightly down onto the cast iron pipe to form a good seal with the surface of the pipe.

Once the epoxy putty was in place, the whole repair was overwrapped with a SylWrap HD Pipe Repair Bandage. SylWrap is water activated and sets rock-hard to provide an impact resistant layer over the initial repair. It does not need to be stretched for an effective application, meaning that it could easily be applied to the cast iron pipe despite the space constraints.

It also saved time with the repair being effective in less than an hour. Sylmasta have since recommended that the hotel take stock of the SylWrap Pipe Repair Contractor Case, a kit which contains enough products to carry out up to six pipe repairs.

A Contractor Case can be easily stored on site, enabling an emergency pipe repair to be carried out as soon a pipe related problem arises for the hotel in the future. All the products included in the Contractor Case are WRAS approved, making them safe to use with drinking water. 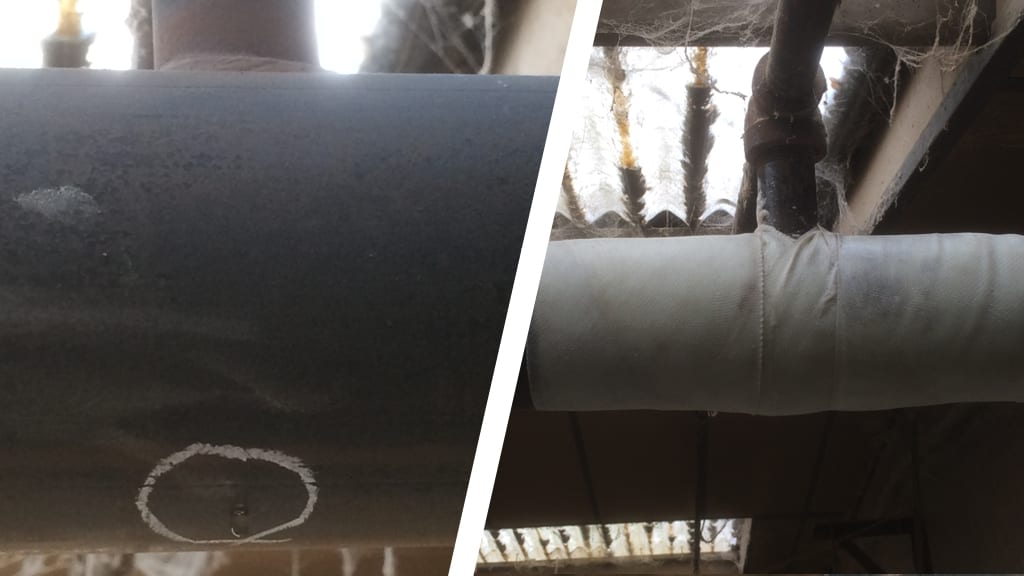 After a sprinkler maintenance company informed a furniture company that the only solution to a pinhole leak on a tee in their factory’s sprinkler system was to replace the entire length of steel pipe, the furniture company instead sought out Sylmasta to provide a cost-effective and convenient repair.

The furniture company needed a quick repair for a number of reasons. There were two safety elements to consider; the first being the very obvious dangers that come with a faulty sprinkler system and the second that the leaking pipe was located high up in the roof of the warehouse, next to the incoming electricity supply.

Any water which passed through the leaking section was therefore in danger of coming into contact with the electrics. There was also the danger that water escaping from the pinhole would cause damage to the furniture being stored and manufactured below.

Initially, the furniture company contacted their sprinkler maintenance company. After inspecting the problem, the maintenance company decided to try and repair the leak with a pipe repair clamp. This proved impossible however due to the pinhole being directly below a tee junction in the steel pipe.

After this failed attempt, the sprinkler maintenance company advised that the only solution would be to replace the entire length of steel pipe, at great cost to the furniture company and forcing the closure of the factory whilst the work was undertaken.

Understandably, this was a road that the furniture company did not wish to go down, and so they decided to seek out alternative repair methods, leading them to Sylmasta. Because the pressure was turned off in the damaged section of the sprinkler system, Sylmasta were able to recommend a SylWrap Standard Pipe Repair Kit for the repair.

The furniture factory reached the damaged section of pipework using a tower. Once up in the rafters, a Superfast Steel Epoxy Putty Stick was mixed by hand and used to plug the pinhole leak. The Putty hardened within 5-10 minutes, after which it was overwrapped with a SylWrap HD Pipe Repair Bandage.

The bandage was applied over the pinhole leak and around both sections of the tee junction to provide maximum coverage and pressure resistance. One of the furniture factory’s concerns was that the pressure in the sprinkler system can be as high as 8 bar and they needed a repair method that could withstand such levels.

This was no problem for the Standard Pipe Repair Kit. The cured Superfast Steel and SylWrap Bandage are suitable for repairs up to 30 bar. Within an hour of the repair being completed, the system was put back into use at a fraction of the cost of the replacement recommended by the sprinkler maintenance company.

Following the repair, the furniture company’s maintenance manager got in touch to say: “I found the repair putty and the bandage very easy to use and will no doubt be using Sylmasta products again.”

Category: Case Studies
Tags: Pipe Repair Contractor Case, Standard Pipe Repair Kit, Superfast Steel Stick, SylWrap HD Pipe Repair Bandage
Cookies are used to ensure you are given the best experience on our website. By continuing to browse the site you are agreeing to our use of cookies.OkPrivacy policy