Wrap & Seal Electrical Tape is a self-fusing repair tape which is used for electrical insulation and repairing damaged cables.

Wrap & Seal offers a superior alternative to traditional adhesive electrical tapes because it fuses with itself and turns into a solid rubber band. This makes it ideal for wrapping damaged wires, insulating terminal blocks, sealing around cable glands and wrapping and sealing junction blocks.

In electrical repairs, Wrap & Seal can be used for areas such as electrical connections, motor coils, transformers, power leads and terminal splicing.

It is easy to apply. Simply wrap the tape around the area requiring repair, where it will form a solid bond. Only a minor stretch and one layer of Wrap & Seal are necessary when carrying out an electrical repair, meaning that one roll can be used for multiple repairs.

When sealing junction boxes against moisture, it is recommended that the cavity is first filled with Pack & Seal non-setting insulation putty first, before being wrapped with Wrap & Seal.

Wrap & Seal can also be used to fix leaking pipes, even when water flow cannot be turned off. Its extra thickness amd the fact that it can be stretched to 300% its length allows for more pressure per wrap to be applied over leaking pipes. Wrap & Seal is WRAS approved, meaning it is safe to use with drinking water. 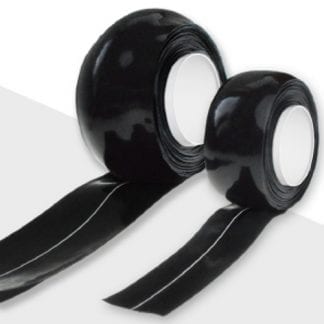 You're viewing: Wrap & Seal Electrical Tape From: £10.08
Select options
Cookies are used to ensure you are given the best experience on our website. By continuing to browse the site you are agreeing to our use of cookies.OkPrivacy policy