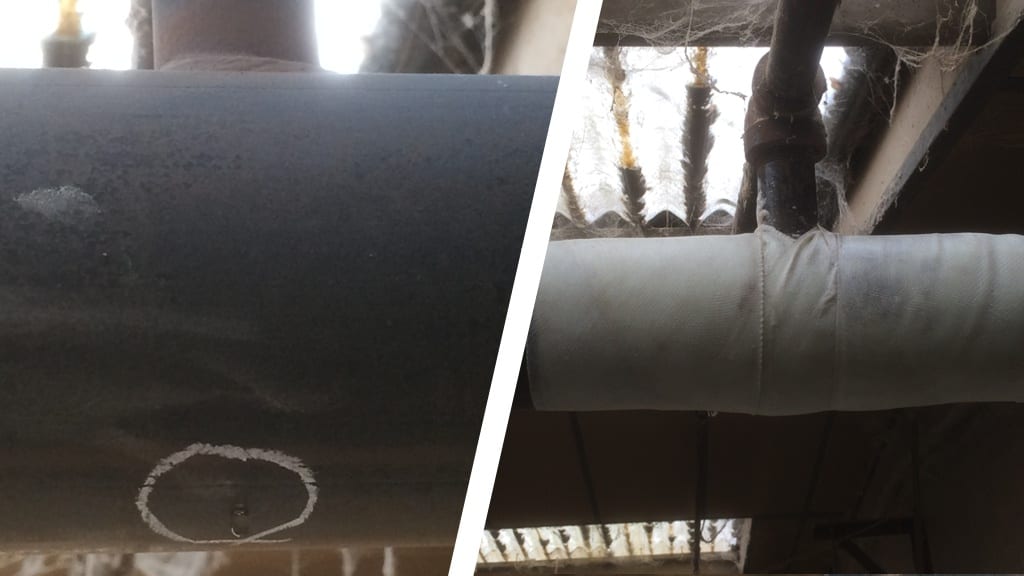 A furniture company in the United Kingdom were faced with a real problem when a section of pipework in their sprinkler system developed a pinhole leak which required an immediate repair.

The pipe in question was located high up in the roof of a warehouse, close to the incoming electricity supply. Any water that passed through the leaking section was therefore in danger of coming into contact with the electrics or falling onto the products being stored and manufactured below.

Because of the pipe’s position in the roof and the complications involving the electrics, this would have been a costly and time consuming repair. The furniture company doubted whether it would even be possible.

They therefore attempted to fix the leaking sprinkler system with a pipe repair clamp. This proved to be impossible however due to the tee pipe coming off the opposite side, directly above where the pinhole leak was located.

It was then that they turned to Sylmasta. The damaged section of the sprinkler system was turned off due to the problem, which meant that we were able to recommend the SylWrap Standard Pipe Repair Kit.

Superfast Steel Epoxy Putty was used to plug the pinhole. The hand-kneaded putty has a work life of approximately 3 minutes, within 5-10 minutes it will harden and form a cohesive bond and after one hour, the system being repaired can be put back into service.

The pinhole was then overwrapped using a SylWrap Pipe Repair Bandage. The water-activated bandage sets rock hard in 30 minutes, providing a permanent repair for the sprinkler system pipe.

One of the concerns that the furniture company had was that the repair needed to be resistant up to 8 bar pressure. The Sylwrap Standard Pipe Repair Kit can handle pressure of 30 bar, so this was not a problem.

Following the repair, the furniture company got in touch to say, “I found the repair putty and the bandage very easy to use and will no doubt be using Sylmasta products again.”