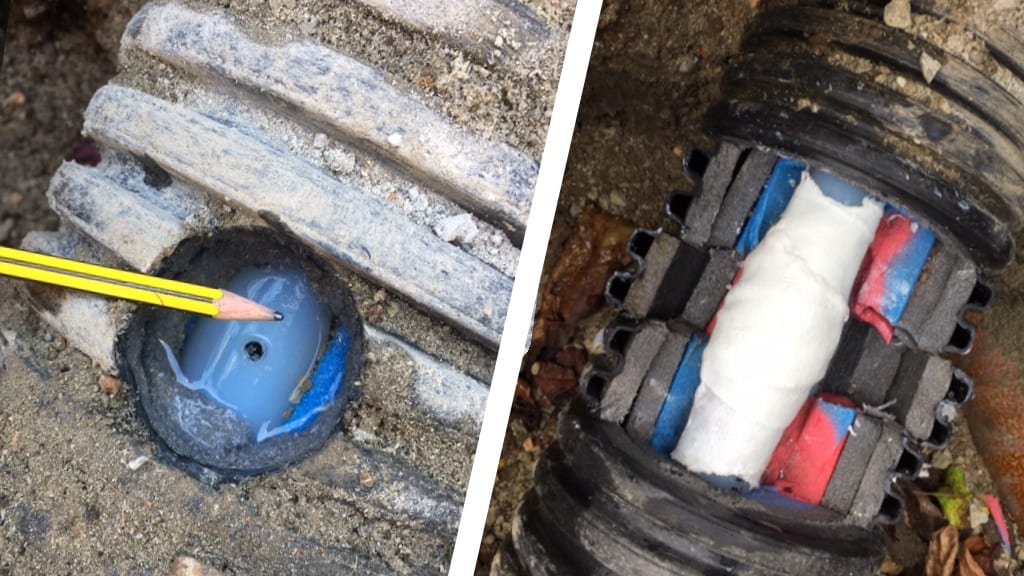 A farm in the United Kingdom was undergoing building works when contractors accidentally drilled through an underground heating pipe buried under a paved yard between two buildings, requiring an emergency repair.

The contractors had initially believed the pipe to be a drainage pipe. It was only once they had cut through it using a hole saw that they realised it actually contained two insulation lagged pipes and was supplying hot water from an outbuilding to the main building on the farm.

After an initial inspection, it looked like carrying out a repair to the pipe at the farm would be both difficult and expensive. It would involve digging out the pipe and cutting away the outer pipe and lagging in order to access the leaking area.

Instead of this complex and time-consuming repair, the contractors instead turned to a SylWrap Universal Pipe Repair Kit to fix the problem in a fraction of the time and for minimal costs.

Using a Universal Pipe Repair Kit meant that a minimal amount of lagging needed to be removed. There was also no need to isolate the flow as the Universal Kit works on live leaks even when pressure cannot be turned off.

The leak was easily sealed using Wrap & Seal Pipe Burst Tape. Wrap & Seal is a self-fusing pipe repair tape which stretches to 300% its length. The tape formed a solid rubber band over the hole which had been cut into the pipe, sealing it.

Both Wrap & Seal and SylWrap Pipe Repair Bandage can withstand temperature extremes up to 200°C, ensuring that they were suitable for a repair involving a hot water installation.

The products are WRAS approved, meaning that they are safe for use with drinking water.