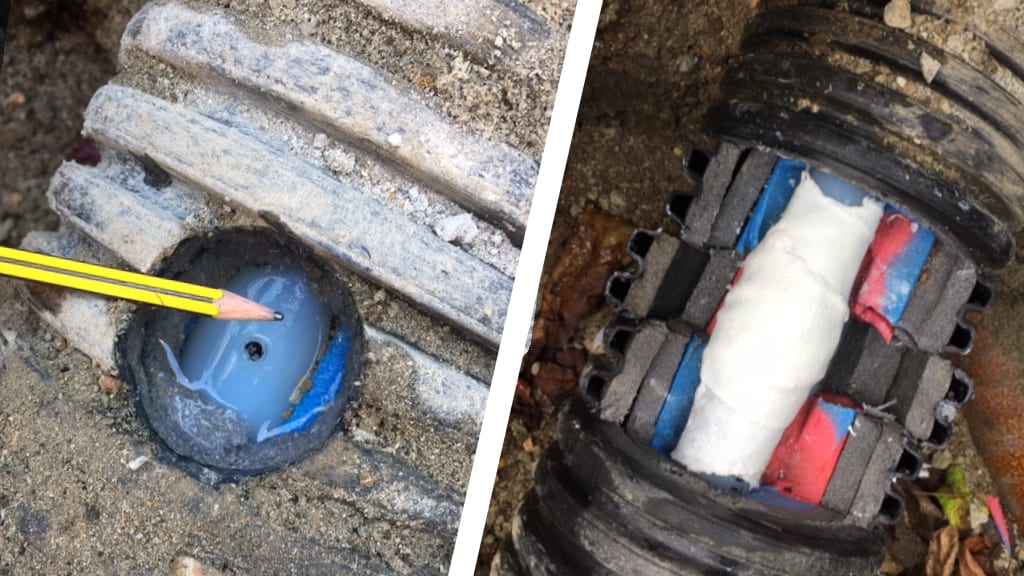 A farm in the United Kingdom was undergoing building work when contractors accidentally drilled through an underground heating pipe with insulation lagging supplying the farmhouse’s hot water, which subsequently required a rapid repair to keep the hot water on

The contractors were working on a paved yard between two buildings when they came across what they believed to be a disused drainage pipe. It was only once they cut into the pipe using a hole saw that they realised it actually contained two pipes with a layer of insulation lagging which supplied hot water from an outbuilding to the main building on the farm.

After an initial inspection, it looked like replacing the pipe would be both extremely difficult and very expensive. The pipe would have to be dug out from the ground, and the outer pipe and a huge amount of insulation lagging cut away just to access the heating pipe which was leaking.

To carry out a replacement, the farmhouse’s hot water supply would have to be shut off, leaving the occupants to go without any hot water or heat. In an industry such as agriculture, that would have been a nightmare.

Instead of this complex, time-consuming and inconvenient replacement, the contractors turned to a SylWrap Universal Pipe Repair Kit to fix the problem in a fraction of the time and for minimal cost. The Universal Kit allows repairs to take place on live leaks, which also meant that water pressure did not need to be turned off.

The contractors began the repair by removing a minimal amount of lagging. Once they could access the heating pipe, Wrap & Seal Pipe Burst Tape was wrapped around the pipe, fusing into a solid rubber bound to seal the live leak. With pressure resistance up to 30 bar and temperature resistance to 200°C, Wrap & Seal was more than suitable for a repair involving a hot water installation.

A SylWrap HD Pipe Repair Bandage was then wrapped over the initial repair to provide an impact resistant layer to the Wrap & Seal. This protective covering was vital in this application to reinforce the initial repair against any further complications during the building works.

Both Wrap & Seal and SylWrap HD Pipe Repair Bandage have WRAS approval, meaning that they are safe to use with water which might be consumed by humans. This was another important consideration for the repair, given that the pipe supplied a domestic property.

The entire repair was completed in less than an hour, a significant reduction on the amount of time it would have taken had the contractors needed to dig out the pipe to replace it. The speed and ease of the repair ensured that there was minimal disruption to the hot water supply in the farmhouse and saved the contractor the expense that would have been incurred by a having to replace the pipe.

Category: Case Studies
Tags: Pipe Repair Contractor Case, SylWrap HD Pipe Repair Bandage, Universal Pipe Repair Kit, Wrap & Seal Pipe Burst Tape
Cookies are used to ensure you are given the best experience on our website. By continuing to browse the site you are agreeing to our use of cookies.OkPrivacy policy