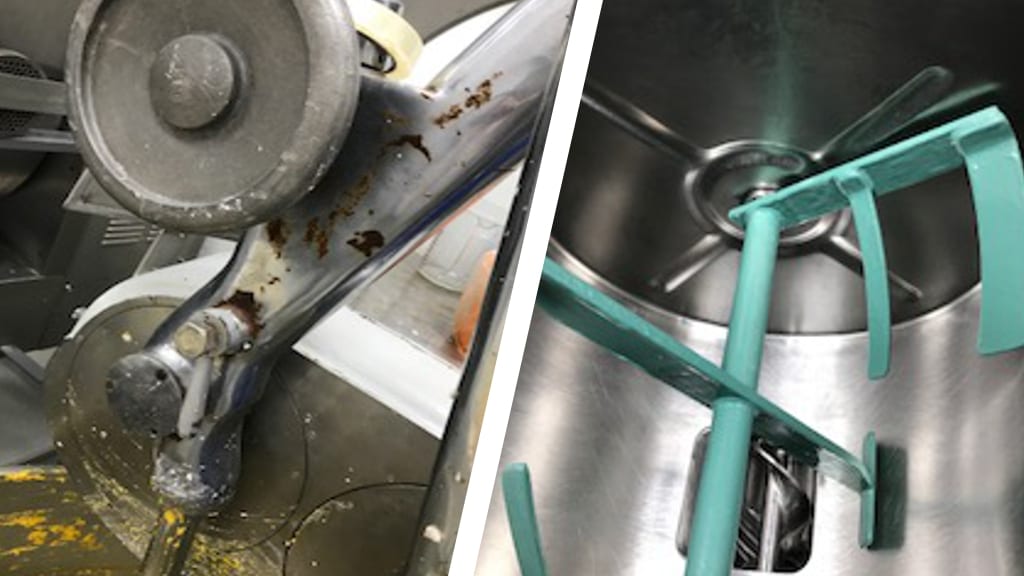 When metal blades in two flour mixers were found to be suffering from corrosion, a commercial bakery in Puerto Rico was faced with the prospect of a costly shutdown – until a Sylmasta repair saved the bakery a load of dough in more ways than one.

The mixers in question were used by the bakery to mix together flour and other ingredients to make turnovers and other popular products.

During a regular inspection to the machinery, it was discovered that the blades were suffering from corrosion. Production using the two mixers in question had to be halted until the parts were either replaced or underwent repair.

New blades for the flour mixer would have cost $3000 per blade, setting the bakery back $6000 on new parts for both machines plus installation costs. There were further complications when it was revealed that replacement blades were not available from stock.

This meant that the parts would have to be built from scratch, a time consuming process that would have meant a long wait for the mixers to be put back into operation. With the two mixers out of use for the foreseeable future, the bakery would have found itself struggling to fulfil existing orders, let alone take new ones.

$6,000 to replace the metal blades suffering from corrosion and many weeks of lost production. The bakery was looking at losing a lot of dough, both in terms of money and the delicious baked goods that it made.

A better solution than replacing the blades was needed and the bakery started looking for repair methods. That led them to Sylmasta, who were able to recommend the use of Sylmasta Ceramic Brushable Green for the job.

Ceramic Brushable Green is a toughened, solvent-free, water-resistant coating that is used to reinforce and strengthen machine parts. It offers protection against corrosion and its ultra smooth, low friction finish reduces abrasion.

Coating the blades with Ceramic Brushable Green therefore not only allowed the flour mixer to be put back into service, but it lengthened the lifespan of the parts by making them less susceptible to wear and tear.

The ease with which Ceramic Brushable Green is used enabled the bakery to carry out a quick and easy repair. It is brush applied and simply painted onto the area requiring repair. Several coats were used and within 24 hours of the application, both the flour mixers in question were put back into operation and the bakery was operating at full capacity once again.

After completing the repair, the bakery contacted Sylmasta to say how happy they were with the solution and that the blades now looked as if they were brand new. Ceramic Brushable Green is reinforced with hard-wearing, high purity, green silicon-carbide, which means it will be a long time before the blades require servicing again.

Category: Case Studies
Tag: Ceramic Brushable Green
Cookies are used to ensure you are given the best experience on our website. By continuing to browse the site you are agreeing to our use of cookies.OkPrivacy policy